Bursting to Release Balloons? Some Facts.

On a recent trip, I encountered another group conducting a balloon release. It wasn't my first time observing or participating in this type of experience, and perhaps not my last.

Undoubtedly, releases continue to be popular for a number of reasons, including their ability to create a brief sentimental or emotional experience. Often, they are replicated by individuals that had a meaningful experience earlier, and wish to share the same with others. Perhaps it was at a funeral, end of camp ceremony, start of a major sporting event, or other types of activities. For those who have engaged in a balloon release that was well facilitated, it may have had a lasting impact, and therefore its hard to argue against having balloon releases that may impact the thoughts and emotions of a participant.

As part of our tours, we ask every passenger to join us as we visit our world treasures, to pick up 10 items of  trash per day, and hope they will continue to do so as they explore the world on their own. We see a lot of plastic bottles & bags. So many cigarette butts its shameful, as well as many other types of trash waste - some that isn't fit to be picked up by a tourist.

One item we encounter often are balloons. Far too many to justifiably have come from a child losing one when returning from the local restaurant, or a weekend fair. No - these are likely coming from mass balloon releases. We find them everywhere - National Parks, city streets, scenic vistas, beaches - just everywhere!

So it begs a few questions - what is the impact of balloon releases? Does the environmental impact outweigh the human gratification?

Largely, the report was based solely on laboratory experiments, and math calculations derived from those experiments to project an outcome. It was a good place to start, but failed to back up the research with real world field data and observation. In short, what happens in the lab, may not actually be happening in the world, and in this case, their lab observations were not reality.

1. They proposed that the vast majority of balloons released, rise to about 28,000 feet, shattering to small pieces, and then are dispersed by the wind across the earth. A photo of one that was actually captured by a GoPro camera can be found HERE.

2. They also claimed that the balloons released biodegrade as rapidly as an oak leaf, if left in the same environmental conditions as the leaf.

1. None of their experiments were on actual balloons that burst 28,0000 feet in the air. Even the picture of one from space linked above, didn't shatter, and become lots of little pieces, but shredded, still knotted in the end holding all the pieces together, to look like - perhaps a jellyfish. Every balloon is going to burst differently. How full it is at time of release will impact at what altitude it will burst, as will the age of the latex balloon, how long it has sat in the sun, and other important environmental factors. I suspect that far too many rupture at much lower altitudes, and create the amount of balloon litter that is found.

This image illustrates the vast ways a balloon can rupture.

2. The assumption that a latex balloon biodegrades as quickly as an oak leaf, and is therefore an environmentally friendly, acceptable choice is flawed for many reasons. First, it doesn't tell the reader how long oak leaves take to biodegrade. In the conditions you might find an oak tree, in the Eastern United States, the leaves can biodegrade in two to three years. Gamble Oak, found in much drier conditions in the Western United States, can take three to five years to decompose! I find it disingenuous to make the perception that balloons are readily biodegradable , when in reality, it can take many years. This recent field study shows how long it has taken 2 balloons found at sea, to decompose in Florida.

Clearly, every balloon released, at the minimum, becomes unsightly litter somewhere on the earth, for at least TWO YEARS! (and likely much longer!) The balloon industry claims that intact balloons only litter about once every 15 square miles. That really means that EVERY RELEASE deposits a trail of balloons across the globe, at least one every 15 miles. What if people drove down the road and would throw out trash only once every 15 miles? Would that be an acceptable amount? For every balloon release in your community, would it be acceptable to tie one in your tree, on our roof, and leave it til it decomposed?

Whale Watch organizations have been conducting surveys of litter debris found in coastal waters of Maine, New Hampshire, Massachusetts, Connecticut, and Rhode Island. Over the last 8 years, balloons make up the largest concentration of debris found in New England waters.

3. The Balloon industry claims that only one animal in the last 18 years has been documented as having died from a balloon. Perhaps they ought to stop sucking the helium, and accept that its far more prevalent.

One case resulted in litigation, from the death of a prized bull in the UK.

Too many only result in the death of wildlife. Its suspected that for every dead bird found, 100 others have died that will not be discovered (keep in mind that for every 360 pictures of dead birds due to balloons, its projected that the real death count is equal to all the birds found dead during the Exxon Valdez oil spill!)

We only post these graphic pictures to drive home the point. 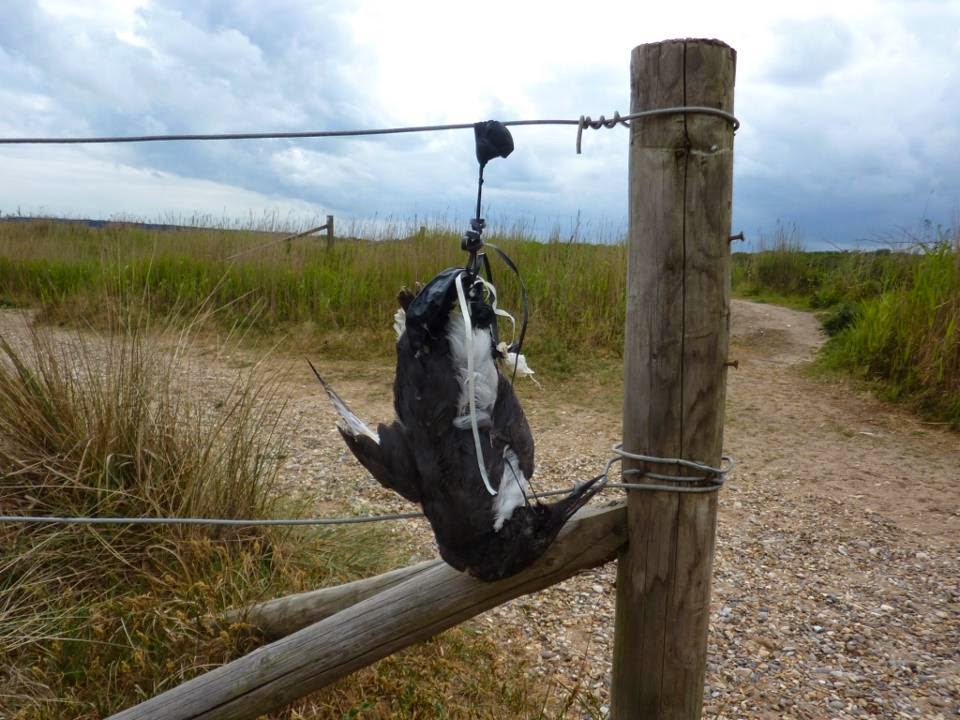 For our friends in Arizona, perhaps the death of seabirds, or the litter of balloons on the beach has little impact, even though the balloons they release can end up in the ocean.

A little closer home, balloon litter is found in our forests, streams, and especially the Saguaro National Park near Tucson. A recent study found 62 balloons per square kilometer in the Rincon Mountains near Tucson! That's twice the amount of other litter such as plastic bags, and almost three times more than the amount of rattlesnakes in the same study area!

That's the unsightly balloon litter we see while on our tours! At beaches, parks, wild areas, forests, harbors, just about every place you would not want to find a balloon. Hanging in a tree, trapped in a waterway, and even killing wildlife.

While balloon releases are still lawful in Arizona, they are becoming outlawed in many jurisdictions. Not just for the environmental impact, but the impact created by power outages caused by released balloons impacting power lines and substations.

Back to the recent release pictured at the top of this post. Of all the participants whom I spent the next 2 hours, only one even talked about the release as having any impact. Why? Because it reminded her of the release she participated as a youth, where a Midwest farmer found the balloon littering his field, removed it, and found a note about where it was from, subsequently replying to the sender (this woman.) The actual release had no lasting impact on the group as far as I could tell.

But even if it does, there are much better, more lasting, ways to have the same impact, perhaps an even greater experiential experience, that could be of more value to the participant and the world.

1.Planting trees.
2. Riparian restoration.
3. Time Capsules
4. Service to the World, ie hygiene, water filtration, cooking systems.
5. Sending gratitude to others through cards or notes in the mail.
5. 10 Items of Trash a day, with a celebration at the end of the primary experience.

Lets end balloon releases. Its the responsible choice to make.

(Don't get me wrong - I'm not a tree hugging environmentalist. I see value in cutting down a tree, and also planting another. I can enjoy a campfire, but have had some majestic evenings in the wilderness, with no fire except the billions of flames burning above in milky way. I've hunted wild game, and stalked many fish, some which came to our table, but most as images for my camera. Perhaps a conservationist is the best label - if we are going to use one. Either way, I hope you will join one of our tours, as we relish in the world's beauty, and perhaps leave it better than we found it - 10 items per day)
Posted by Unknown at 6:35 PM